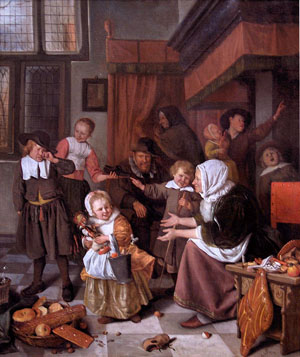 You’d have to feel sorry for kids in Ireland. And in the UK, North America, Australia… in all of the English speaking world in fact, and beyond. They have all been brought up to believe that this made-up character called Santa brings them presents on Christmas Eve, as long as they’re on the “Good” list.

Since today’s Santa is little more than an advertising mascot created by Coca Cola in the 1930s, it might as well be Ronald McDonald who supplies the toys. Hollywood has illustrated more than once that Santa belongs in the same category of children’s fiction as the Easter Bunny and the Tooth Fairy, by letting these characters appear alongside each other – most recently in “Rise of the Guardians”.

Today is the 5th of December, and children in my native Holland are preparing for the imminent arrival of Saint Nicholas. Unlike this Santa fellow, Saint Nicholas is very real – I’ve met him on several occasions when I was younger. He brings us presents on the eve of his feast day, which falls on the 6th of December. No secretive break-ins during the middle of the night, no need for far-fetched fairytales about elves or flying reindeer – the Good Saint rides around on his white horse and is assisted by one or more helpers of African origin, Zwarte Piet (“Black Pete”).

Every year in mid November, Saint Nicholas arrives in Holland by steam boat from his current domicile in Spain. This event is televised live, and in the days that follow the Saint can be seen making his entrance in towns and villages around the country.

During the days leading up to December 5th, children can get a taste of things to come by occasionally placing one of their shoes by the fireplace (or another form of heating – nowadays it just serves as a general marker for the Saint’s helpers to locate the shoes). Leaving some hay and a carrot for the horse, the children will find them replaced with a small toy and some typical Saint Nicholas sweets when they get up in the morning.

Some days, just when you’re quietly reading a book or watching TV, an unexpected banging may rattle the door of the room you’re in, and someone shouting if there’s any naughty children in the house. The obvious denial then results in the door opening just enough to let a gloved hand appear and scatter sweets across the room.

These seasonal sweet treats are really something special – spiced mini biscuits, chocolate letters (of course you get one to match your initial), marzipan shaped and coloured to resemble almost anything… an endless variety of yumminess – pepernoten, speculaas, suikergoed and marsepein.

For the older kids and adults, the festival takes on an extra dimension with the creation of a “surprise” – pronounced as the French word, “sur-preesuh”. Poorly imitated by the misguided Santa-followers as a “Chris Kindle”, this is far more than just drawing lots and anonymously submitting a present. No, a surprise can be a work of art or intricate cocoon, the wrapping of the present being the most important part – shaped and modelled to represent something that will suit, please, amuse or indeed annoy the recipient. Listening to a phone-in on Dutch radio the other day, I heard people discussing their most memorable surprises – they would remember the surprise, but often not what was in it.

When darkness falls on December 5th, we sit and listen anxiously for any sign of the Good Holy Man. Often it takes a fearless adult to go check outside, who then runs the risk of missing the Big Moment when the doorbell rings or the knock on the window finally comes. Somehow Black Pete or the Saint himself always manages to avoid being seen, leaving a big box or sack – but most commonly a laundry basket – containing everyone’s gifts to be dragged into the house.

Discipline is of the essence here – there is no chaotic grabbing or unwrapping – this is Parcel Night (pakjesavond) and not Parcel Minute, so we’ve got all night. Sitting around the laundry basket, we take turns in blindly taking out a parcel and handing it to the person named on the tag. Most presents will be accompanied by a verse, carefully written by the Saint to reflect on events during the past year, or just to tease the reader – the verse must be read out loud before the present can be unwrapped. Sometimes such a verse can contain instructions on where to locate particularly bulky presents that may not fit in the original delivery.

Saint Nicholas became popularly known as Sinterklaas, and when pronounced by English speakers, the resemblance with the name “Santa Claus” is of course no coincidence. In the same way that the pioneers of Christianity supplanted existing heathen festivals such as the springtime fertility festival with Easter and the midwinter feast with Christmas – so the distorted Saint must have ended up on the nearest available feastday – Christmas.

Having been raised a protestant like the majority of children in the Northern part of the Netherlands, the fact that the Saint dons the outfit of a Catholic bishop completely eluded me. When confronted with television footage of a special occasion mass attended by high ranking clergy, my reaction is still, “Hey look, it’s Saint Nicholas”. Or as my son remarked when we bumped into the Saint during our latest visit to Holland, “He looks like the Pope”.

The large Anglican church just off Shop Street in Galway’s city centre is dedicated to Saint Nicholas. It is one of many such churches around the world, Nicholas being the patron saint of – among many others – sailors and fishermen (which explains his presence in Galway) and, of course, children.

The origins of the modern-day Santa are traced back to something as unimpressive as a poem written less than 200 years ago, when Clement Clarke Moore single handedly distorts the truth about a visit from Saint Nicholas and invents the reindeer-and-sleigh nonsense. The gullible Americans fell for it, and spread this stuff around the world along with their burgers and Coke.

Saint Nicholas celebrations however, can be seen depicted by one of the Dutch Masters of the 17th century, Jan Steen. The earliest mention of the Saint Nicholas feast is from 1360, according to infonu.nl. And of course, let us not forget that we are dealing with a genuine historic figure – Nicholas was bishop of Myrain what is now Turkey, early in the 4th century.

The Saint’s helper I mentioned earlier, Zwarte Piet, has miraculously survived the racial equality and political correctness of the modern era. It is obvious that his depiction as a Minstrel-type character dressed in a 17th century servant outfit is a reminder of the traditional origins, in an era when the Dutch were not only masters of the art of painting, but also of the slave trade. It seems, however, that some critics of the Zwarte Piet tradition fall into the same category of people as those who object to primary school nativity plays, on the grounds that they may be offensive to those who follow a different faith.

Saint Nicholas has nothing to do with Christmas, no matter what the words of The Night Before Christmas might suggest. In Holland, we were always able to celebrate Christmas as a religious feast with some heathen decorations thrown in – but the commercialism had at that stage already been taken care of by the Bishop of Myra.

The existence of Saint Nicholas or Santa Claus is not a matter of belief – the former is living history, the latter is a fraud. It’s as simple as that.

4 thoughts on “Why I Don’t Believe in Santa”