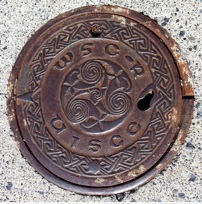 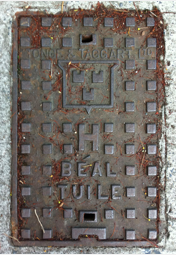 When friends of ours decided to get married sometime in the mid 90s, they asked me to look after the layout and printing of the missalettes. Of course I was happy to oblige, and the booklet went through a few versions before everyone was happy. At one stage the groom asked me to make sure the priest was mentioned in the line-up. His name was father Tonge — “as in Tonge & Taggart, you know, from the manhole covers”.

I have to admit that I had never heard of Tonge & Taggart, not having spent much time reading manhole covers. Since that day however, I notice the name every time I look down while walking Dublin’s streets — strange how a sewage drain can remind you of a friend’s wedding.

Tonge & Taggart Limited was a Dublin foundry which has since been swallowed up by the Smurfit group. If you’re in Dublin, you don’t have to travel far to stumble across, or even over, an example of their ironmongery. Chances are there’s a Béal Tuile cover right outside your front door, adorned with the three castles of the Dublin crest and the historic company’s name, of course.

Invariably, these iron Flood Mouths are complemented nearby by a small, usually round cover which hides a mains water stop valve. The majority of these little covers are Irish speaking, but more recent versions appear square and English speaking. There is even a bilingual version for those who are unsure about the difference between uisce and water. It is unclear which company provides these water valve covers — and there are far more players than Tonge & Taggart.

Once you start looking under your feet while crossing streets and pavements, you come across names such as Dudley & Dowell, Cavanagh, Conway & Sons, William Lacy and so on. Some are kind enough to put the year of manufacture on their creations; Conway Foundries appear to have been busy in the 1960s. Cavanagh have been providing manhole covers and other castings for 200 years and are still very much in business.

And it’s not just sewage pipes and water drains that are covered by these iron lids. The city has a vast array of tunnelled utilities buried underneath its streets, and the number of hatches, covers and lids that provide access increases dramatically as you get closer to the city centre. Water, gas, electricity, telephone, cable TV — they all fight for space in what must be a veritable spaghetti soup of pipes, wires and cables. Bus shelters and traffic lights have their own hatches and business premises have cellars and basements with iron trapdoors and grilles to add to the streetscape.

When the Queen came to visit Dublin recently, followed closely by the US President, all these metal covers on the street surface became potential hiding places for bombs and assassins. As part of a massive security operation, gardaí roamed the streets armed with spanners, yellow spraypaint and filler guns. Every single manhole cover, lid, hatch and trapdoor was inspected, sealed and marked with the yellow paint, using the spanner as a stencil.

Dublin’s manhole covers provide an insight into the history not only of its foundries and ironworks, but also of the companies that used their products. As a result we can now witness the scattered chronology of P&T, Telecom Eireann, Eircom and even Esat Telecom throughout the city. Apart from being a purely functional piece of street furniture, some are actually quite attractive — such as the rare Uisce covers with intricate celtic lace patterns and the cryptic acronym WSC-R. An example can be found on Mellifont Avenue in Dun Laoghaire.

However fascinating these unassuming objects that we walk on every day may be, I don’t think I’m ready to join the Flickr Manhole Cover Pool as yet. Surprisingly, that group has more than 1,000 members and almost 13,000 pictures — and you thought trainspotting was weird.

51 thoughts on “Tonge & Taggart and the World Beneath Our Feet”