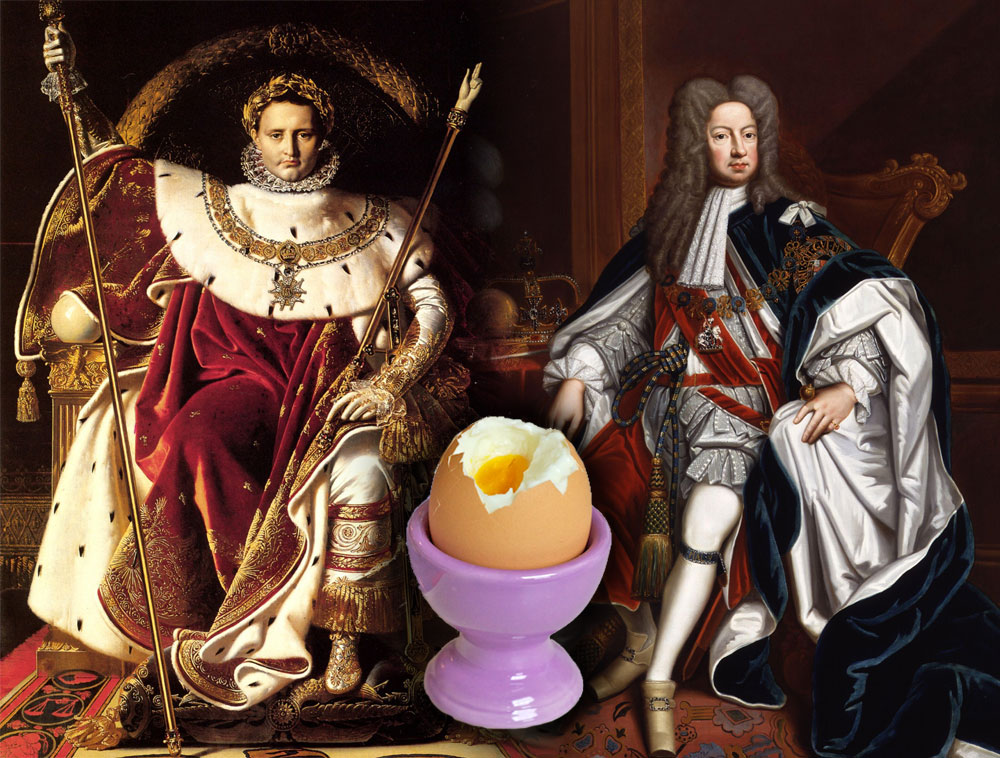 Apart from the fact that they were both famous monarchs, you wouldn’t think that Napoleon Bonaparte as Emperor of the French had a lot in common with England’s King George I — especially when you consider that George I (1660-1727) died more than 40 years before the birth of Napoleon (1769-1821). But as it turns out, they share an experience that involves… eggs.

After he escaped from Elba, Napoleon made his way towards Paris through the Haute-Provence. When he came to the hamlet of La Clappe on the morning of 4th March 1815, he decided to take a break, and was served two eggs and a bottle of wine by a local innkeeper. When presented with the bill, Napoleon exclaimed, “Eggs must be very scarce around here!” — “No, eggs aren’t scarce,” the innkeeper replied, “but emperors are.”1

This story pops up in various reports about Napoleon’s return from Elba and it appears that La Clappe is the universally agreed location of the event. There is another version however, reported by Alain Pigeard in Le Souvenir Napoléonien,2 in an article about Napoleon’s visits over various years to the Bourgogne area of France. The timing of the story is similar in that it deals with the emperor’s return from Elba, but in this case it is said to have taken place in the town of Tournus on 14th March. The innkeeper justifies the inflated price for a single egg with a smile and the remark, “that isn’t too expensive, I don’t have the honour to serve the Emperor every day.”

Since it seems unlikely that two people share the same opportunity to demonstrate their wittiness in front of such a distinguished guest within 10 days and more than 400km apart, I thought I’d try and find the truth behind the legend. It seemed that Uncle Google would quickly tell me if there were other sources who place Napoleon in Tournus while feasting on his overpriced egg. And so I did come across more egg stories — with a twist.

A French version of the myth of the innkeeper with the egg appears in a number of publications, often as part of a language course — in a column entitled Hablo Francais in a Californian newspaper3 from 1931 for example, as well as the book French Conversation and Composition by Henry Vincent Wann4 from the 1920s.

None of these (red top pun alert) eggspensive eggnecdotes make mention of Tournus as the location, but what’s more, they don’t even mention Napoleon. Instead, the protagonist is England’s King George II (1683-1760), who consumed his eggs about half a century prior to the Emperor of the French. The language exercise appears under the heading L’occasion fait le larron — opportunity makes the thief.

More recently, we find the story in Bartlett’s Book of Anecdotes,5 originally published in 1985 (revised in 2000). Here, the event is attributed to George III (1738-1820), a contemporary of Napoleon’s — but other than that, it’s a literal translation of the earlier French versions:

The keeper of a village inn at which King George stopped for a brief meal served him an egg, for which he charged a guinea. His Majesty smiled and commented, “Eggs must be very scarce around here.” “Oh, no, sire,” said the innkeeper, “it is kings that are scarce.”
GEORGE III (1738–1820), king of Great Britain and Ireland (1760–1820).

In any case, it appears that Napoleon’s experience in La Clappe (with Tournus ruled out through lack of evidence) has in fact been recycled from an earlier — and similarly unlikely — anecdote involving a king called George. What’s interesting is that the most recent version links it to George III, whereas the older French version — that clearly served as the source — talks about George II. But it gets better.

There are even older publications where the innkeeper presents his costly egg, and once again we see a corresponding shift in regal generations — all the way back to King George I this time, while on a visit in Holland. One publication is the Encyclopédiana, recueil d’anecdotes anciennes, modernes et contemporaines6 from 1848 that places King George I in Alkemaer (Alkmaar), while a language tutor7 from 1838 reports the setting as Helvoetsluys (Hellevoetsluis). Same innkeeper, same egg, same exorbitant price.

The final nail in the coffin of the Napoleon-and-the-Egg legend comes in the form of L’Improvisateur Français8, published during the Emperor’s own reign in 1805 — ten years before he would stop off in La Clappe. This book appears to be a precursor of the Encyclopédiana and displays the story of George I in Alkmaar in all its glory (my translation):

George I, King of England, who had during his travels to Holland experienced several times how expensive things were, was determined not to enter a single inn in this country. So one day as he passed Alkemaer, he stopped at the door of “The Sheep”, while the horses of his carriage were changed, and ordered three fresh eggs. The monarch had no sooner eaten them or he asked the price. Two hundred florins, the innkeeper replied. “What!” George cried, astonished, “two hundred florins! eggs must be very rare in Alkemaer?” “Oh! No,” replied the innkeeper, “eggs are not rare; but kings are not very common here.”

After reading this, not even the most fervent supporters of Napoleonic legend can uphold the authenticity of La Clappe’s inkeeper anecdote. The only question that remains is, when did the myth first get transferred from George to Napoleon? To find an answer, it’s a case of tracing “the source of the source” several times over, insofar as anecdotes and legends mention their source to begin with. Thanks to a well-referenced article in the History of the Alps9 from 2001 by Régis Bertrand, I’d like to think that I’ve come close enough to identifying the culprit: a certain monsieur Bonnet Denis.

The Annales des Basses-Alpes10 was a journal published by the Société scientifique et littéraire des Basses-Alpes in Digne. Its June, 1915 edition was dedicated to Napoleon’s return from Elba and the Hundred Days on the occasion of the first centenary of the event — and of course the location of our egg legend, La Clappe, is right in the heart of the Basses-Alpes, which is now the Department of Alpes-de-Haute-Provence.

On page 239 of this journal the account reaches the point where Napoleon sits himself down at La Clappe and the innkeeper serves him the two eggs and the bottle of wine — Chabrières, to be precise. A footnote then provides the juicy details that ultimately led me on this quest (again, my translation):

We owe some information about this event to monsieur Bonnet Denis. His father, who was still young at the time, had seen the emperor and knew the details of the event — details that have been recounted countless times on long winter evenings. According to him, when it came to paying for the lunch, Napoleon found that he was charged 20 francs for the eggs. — Eggs must be very rare here! The emperor is said to have cried. — No, eggs aren’t, but emperors are! the innkeeper is said to have replied. — We put the story here for what it’s worth. Another common version in the area has the inkeeper charging the emperor 300 francs for the same eggs.

I strongly suspect that monsieur Bonnet Denis Sr. had a copy of L’Improvisateur Français sitting on his bookshelf. His family appears to have managed to recycle an old anecdote and preserve it for future generations, but I would take his honesty like I take my eggs — with more than a grain of salt.