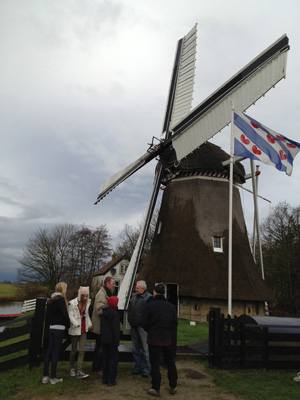 One of the things that happen when you live abroad for a considerable length of time, is that you begin to see your native country through the eyes of a tourist. When going on a visit back home, you do things you would never do when you were still living there. Parisians don’t climb the Eiffel Tower.

I remember my uncle Meinte coming over from the US to visit us when I was still living in Rotterdam. He had been based in Springfield, Massachusetts, since the 1950s and spoke Dutch with a distinct American accent. One of the things he wanted to do during his stay in Holland was to go and see the “bollenstreek” — the famous endless fields of tulips in the West of the country. It struck me as strange that anyone who is from Holland would want to go and see something so blatantly touristy.

Although I have yet to visit the bollenstreek, I have in fact fallen in the homecomer’s tourist trap on several occasions — but this is not a Bad Thing. Like uncle Meinte before me, I have discovered the joys of being presented with experiences that are beneath our fellow country men and women, who assume they know all there is to know about our native land just because they live there.

Recently our little Irish family were driving through the wide open landscape of the Friesland province, my ancestral home in the northernmost part of the Netherlands. As we passed a lone wind turbine, my son remarked how he would like to see “a real windmill” sometime. No sooner had he said that, than his wish came true. We spotted an old fashioned — “real” —windmill some distance from the main road. Unlike the many other windmills we had spotted in the Dutch landscape over the years, this one was actually working, its blades rotating with surprising speed.

We turned off the main road and headed for the windmill, which turned out to be located outside the tiny village of Marssum. There was no big sign, car park or interprative centre — just a footpath hidden between a few houses, leading up to the mill. We parked the car and strolled up the path, which led past a field the size of a football pitch, with floodlights in the centre and deliberately submerged under water — in anticipation of the frost that would turn this setup into a fabulous public skating ring.

A group of men stood in front of the windmill, chatting in their native Friesian language. One of them asked us if we would like a tour — free and for nothing, the mill is operated by volunteers from one of the associations whose members look after these striking monuments.

Since the entrance to the mill was blocked by the swishing blades that almost touched the ground (categorising this type of mill as a “ground sailer”), the millner — our guide — first had to stop the mill by applying some sort of handbrake at the back of the building. A mill will always have two entrances on opposite sides, just in case the position of the blades blocks one of them and stopping the mill is not desirable.

Our mill was one of those classic types you see on Dutch picture postcards, a thatched octagonal construction with four white blades – a so-called “smock mill”. The head of the mill can be rotated a full 360 degrees to position the blades facing the wind, whichever direction it may come from.

The blades themselves are usually fitted with canvas sails, stretched across the wooden frame only when the mill is operational — and like on a sailing ship, sail cover is increased or decreased to suit the strength of the wind. This is of course a laborious process, requiring the mill to be stopped as the sail on each blade is adjusted. The windmill in Marssum is different — its blades are fitted with so-called “patent sails” which are like wooden venetian blinds and can be opened and closed to suit the wind without having to stop the mill. Incidentally, the proper term for a windmill’s blades is actually just that – sails.

Dutch monuments are as easy to date as Irish cars – the year of construction is prominently displayed. I presumed we were looking at something that was built about 200 years ago, and was surprised to see “1903” painted across the top of the building. The millner explained that the mill is a water mill, built in an era when steam powered pumping stations — which have become historical monuments in their own right — had already become the norm in maintaining most polders in the Netherlands. At the time, the polder near Marssum was deemed too small to justify the construction of such a modern pumping station, and the local authorities decided on the cheaper option of a traditional windmill.

At the back of the mill, a large cast iron Archimedes’ screw constitutes the actual pumping mechanism powered by the mill. Its function is now of course obsolete, the water levels in the modern day province are maintained by hundreds of pumps and a network of drainage canals that divert the water back into the sea.

The actual mechanism of the windmill is simple but very impressive. The power of the rotating blades is transferred by gigantic wooden cogs to an equally massive axis that runs the full height of the building, where at the bottom it ultimately powers the Archimedes’ screw.

We were allowed to view all of the different levels inside the mill — where the first level can be booked as the registry office location for weddings. Just below the roof level, a string with large lumps of what looked like meat was hanging from the ceiling. Pork fat, as it turns out, is used to grease the wooden cogs — mineral oil would destroy the timber.

Another method to preserve the wooden mechanism is the use of different timbers for the pegs of the interlocking cogs. The difference in the density of the grain of different types of wood ensures the longevity of these components as they constantly rub against each other.

That the power of this massive wooden machine should not be underestimated was highlighted by the sign at the steep ladder leading into the attic, warning us of “mortal danger”. Even though the mill had been stopped, we were slightly apprehensive as we crawled around where the blades transfer the power of the wind to the mill’s vertical axis, inside a space that can itself rotate in any direction.

Our guide did not speak English, so I acted as interpreter for my family. Funny enough, he regularly broke into Friesian, which was obviously his native and preferred language. Lucky for me, my grandparents — born before the Marsummer Mill was built — endowed me with at least a passive command of that language by exclusively speaking Friesian to their grandchildren.

Now that global warming, rising sea levels and renewable energy have become hot topics, we may yet see the mill in Marssum and its colleagues around the Netherlands come out of retirement. In fact, if that famous quote from around the time the mill in Marssum was built — Everything that can be invented has been invented — had turned out to be accurate, we wouldn’t have ended up with that mess to begin with.

2 thoughts on “The Windmill”