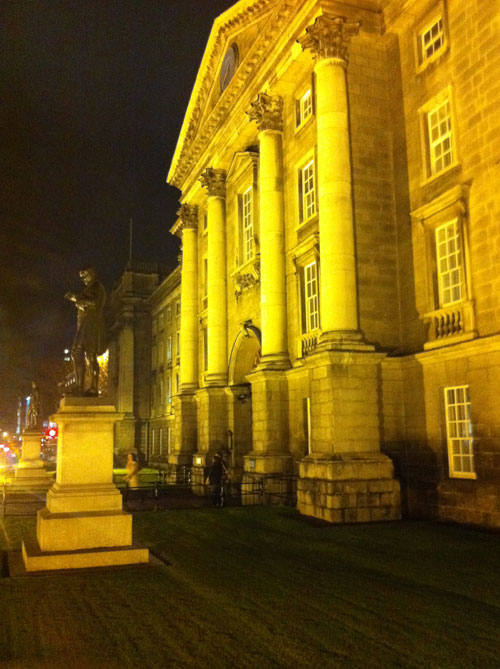 With the recession came our demotion from a two-car to a one-car family and my rediscovery of public transport. For more than two years now, Dublin Bus carries me to and from my place of work every weekday. I have become an expert in the ways, wherabouts and whens of bus routes on the city’s southside.

Regular Dublin Bus passengers will know that almost all routes lead to or through the city centre, like the spokes of a wheel. Travelling across these spokes from south to west, as my journey demands, becomes a challenge as a result. The 75 is really my only option, zigzagging its way from Dun Laoghaire to Tallaght.

In the mornings, I’m not always in the mood to walk the fifteen minutes uphill to the nearest 75 bus stop. The 11 runs much closer to my home, travelling into the city centre like so many “spoke” buses, and from there I have a choice of routes to take me back out to my destination on the West side.

Of course it takes longer to travel into town and back out again. The Goatstown Residents’ Association once hailed the 11 as the slowest bus in Dublin, with average rush hour speeds of something like 2 miles per hour. However, if you’re early enough, the longer trek through town adds just under half an hour to a trip that will take more than an hour anyway.

Apart from the fact that the longer bus trip means less walking and more time to read (I’ve read more books in the last two years than in the previous ten years of car-commuting) as well as maintaining this blog (I tap this on my phone) — there is also an intangible, emotional benefit that makes me choose this time consuming route on a regular basis.

Dublin is a city full of history and culture and a major tourist attraction. That’s easy to forget as we run our rat race on the rims. Although we live so close, we can go for weeks without setting foot “in town”, and our relatives from outside the Pale seem to get a more regular opportunity to soak up the delights of the big city, as they call in for a cup of tea on their way home after yet another shopping spree or trip to the theatre.

Getting off the 11 bus in Dawson street, I’ve already had the pleasure of admiring the Victorian redbricks in Ranelagh and the majestic Georgian architecture around Stephen’s Green. I can mourn the loss of Waterstones but at least Hodges Figgis is still there.

Strolling across Nassau Street, I enter the grounds of Trinity College by the side entrance, next to the Douglas Hyde Gallery. I take the steps down to the café in the Arts building, where I get a coffee to take with me on the next bus — at €1.25, it must be the cheapest coffee in Dublin.

As I walk past the home of the Book of Kells and out onto the cobbles of Parliament Square, I ask myself why I enjoy this little walk in this iconic place so much. Maybe it’s because I was destined to go to university but never did. My secondary school teachers were horrified that I did not pursue one of the six languages I studied for the Leaving (or whatever the equivalent is of the Dutch VWO diploma), but chose to do “something with art” instead.

In any case, I now stroll among the intelligentsia — and the tourists — of Ireland’s oldest university. Had I been born in Ireland instead of Holland as the son of a protestant minister, then Trinity might have been a good choice to further my education. My Catholic friends attended the denominationally more appropriate University College Dublin — I remember going to meet one of them in the engineering department in Merrion Street, in what is now the Taoiseach’s Office, back in ’86.

And so I dream of what might have been but never was. I take a picture of the view across the square towards the Chapel and Regent House, where I’ll be leaving Trinity through the arched doorway and the front gates onto College Green. The 77a awaits.