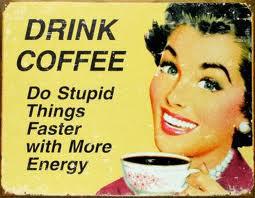 Earlier this week, Patina Vaz Dias posted a picture of one of those mock vintage advertising signs on her Facebook page: “Drink Coffee — Do Stupid Things Faster with More Energy.” I was sipping my own early morning coffee when I read that, and said to myself “En dan is er koffie”, which roughly translates into the title of this blog post.

That phrase is an advertising slogan from the 1970s, praising the qualities of Douwe Egberts coffee, which has become ingrained in the Dutch vernacular forever more. The campaign was playing on emotional values and bringing people together, similar to the Irish “Golden Moments” adverts for Barry’s Tea.

The comparison between those two advertising campaigns immediately highlights an important cultural difference between Ireland and Holland: tea versus coffee. When we talk about a “nice cuppa” in Ireland, this will always refer to tea, whereas the Dutch term “lekker bakkie” is reserved exclusively for coffee — and even immortalised in song by Rita Corita.

Of course the Dutch also drink tea, but as far as the Irish (or indeed, the Brits) are concerned — they haven’t a clue. Extremely weak and without milk, often polluted with strange fruit flavours, what passes for tea in Holland is an affront to tastes everywhere to the west of the North Sea. However, when I first set foot on Irish soil in 1984, the Irish interpretation of coffee was probably even worse by comparison.

Upon ordering a cup of coffee in an Irish establishment, you were presented with a mug in which half a teaspoon of that sawdust that comes in a red Maxwell House jar had been dissolved, weak enough to resemble Dutch tea. On that first Irish visit, my friends and I quickly got into the habit of ordering coffee by asking for the jar of instant and making our own, in order to at least obtain some caffein even if flavour remained elusive. Only once did we come across something drinkable — the little restaurant at the Cliffs of Moher served Rombouts Coffee, albeit those little plastic one-cup filters. It was heaven.

All of that has changed since the arrival of the Celtic Tiger, and even though that creature has now been assigned to history, it is no longer possible to order just a cup of coffee — Maxwell House or otherwise. Instead, we must specify a Latte, Cappucino or Macchiato, Espresso or Americano, Tall, Medium or Grande, the list is endless. Chains of specialist coffee shops have spread across the nation and it appears as if Ireland is trying to make up for a centuries old caffein-free tradition.

Before someone comes along to point out that tea actually contains more caffein than coffee, let me make it clear that I’m not interested in that or any other aspect of tea. I never drink the stuff. For as long as I can remember I’ve been drinking coffee, and I only recall drinking tea when I was still living with my mother, always in the afternoon. Coffee was the morning and evening beverage.

Comicbook hero Asterix the Gaul is invited by his British cousin to help fight the Romans. Since tea has not yet been introduced into pre-Christian Britain (until Asterix accidentally creates the first pot of tea at the end of the story), the British tribesmen and -women are depicted drinking cups of hot water at every opportunity. I guess that image stuck in my mind: tea is no more than coloured hot water.

My sister is the complete opposite of me — she only drinks tea. Some time ago I stayed with her and discovered that the only coffee available in her kitchen was of the decaffeinated variety. At least it was proper ground coffee and tasted good enough. After this morning cup of decaf, I went for a walk to try and clear an annoying headache. I came by a little coffee shop, was tempted, and slipped inside for another coffee. This time, it was real coffee — and within seconds, my headache vanished. I must have been suffering caffein withdrawal symptoms. In any case, it is my firm belief that decaf coffee falls into the same category as low fat milk, herbal cigarettes and alcohol free beer: Pointless.

The Maritime Museum in Amsterdam taught me a lesson about drinking too much coffee, back in 1983 when the Dutch State put me to work there as a conscientious objector (I foresee another blog post). On a typical day, we started “work” at 9 in the morning by congregating in the canteen for our second dose of coffee — we would already have had some with our breakfast. At 9:30 my boss and I would brew some more coffee in our office and go through that before 11. At that stage it was time for our coffee break and we’d return to the canteen for a well deserved caffein fix. One day we had a bit of a slack day and upon returning to the office we made another pot of coffee. By lunchtime my hands were shaking uncontrollably and my pupils had swallowed my irises. I was awake. Since that day, I limit my caffein intake somewhat.

For many years, I considered the ultimate breakfast to be a cup of coffee and a cigarette — freshly brewed and hand rolled respectively, of course. It is probably no coincidence that two of the largest purveyors of coffee in Holland — Douwe Egberts and Van Nelle — had an equivalently large share of the tobacco market. Although I became a non-practising smoker more than three years ago, I still miss this perfect way to start the day. At least I still have my coffee, without which life would become truly meaningless.

6 thoughts on “And then there’s coffee”