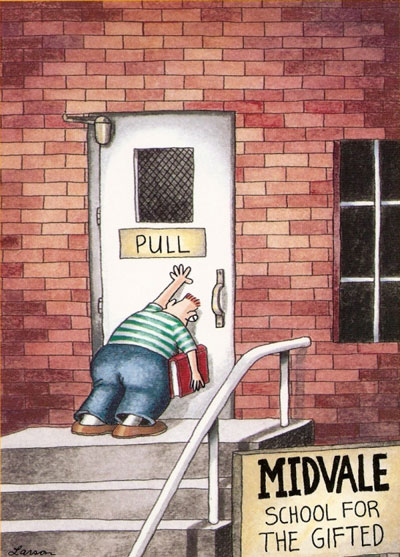 I remember when I first read about the terms push and pull technology in relation to internet stuff. Pull technology is when you go to visit a web page, so you initiate the communication, pulling the information down from wherever it happens to be stored. Push technology is where the contact is made by the server or content provider, pushing stuff to your computer such as new posts on a news feed you’ve subscribed to.

In the early days of the Internet, pretty much everything was served up through pull technology. The arrival of mobile phones has seen a massive increase in push, and not just smartphone things such as Twitter, email and mobile app notifications — even the humble text message is a very clear example of push technology.

So it seems that our media experience is shifting from pull to push, and we are becoming passive consumers of whatever it is that is pushed down our gullets. Or is it?

If we can just forget about the Internet for a second, we may realise that push technology has been around for quite a while. Good old television is push — you sit in front of a box and you watch whatever happens to appear on screen. If you don’t like it, you can push a button and have something else pushed into your living room. Fifty-seven channels and nothin’ on.

Outdoor advertising is the ultimate push technology, in that the recipient does not even have to turn on a particular device in order to receive the information. It may not be as accurately targeted as a phone beeping in someone’s pocket to tell them that Wet Dog Ice Cream is on special offer in their favourite deli — but it has been tried and trusted for centuries.

When we visit a library, we can avail of what I consider pull technology in a low-tech kinda way. This truly is where we decide which information we would like to absorb, assuming we don’t live in some totalitarian state where half the books have been burned.

If we consider today’s online equivalents of the television and the library, we are immediately drawn towards YouTube and Google – both are of course Google, but let’s forget that for the moment. My children no longer watch television like I used to when I was their age — ignoring the fact that I didn’t have a lot of options. Instead, they huddle in front of the family computer to watch the latest episode of Annoying Orange, or some American soap that has never aired on this side of the Atlantic. They decide what they want to watch, and when — in comparison to traditional television, that’s a shift from push towards pull. Fifty-seven channels and somethin’ on all of ’em.

Now let’s take a look at Google vs the traditional Library. Before you start arguing that Amazon or Wikipedia would be more appropriate comparison candidates, I’m jumping to my own defense: Google is by far the most-used tool for people who look for information in this day and age. Back in 1975, if you were told by your history teacher to write an essay about something, you would go to the library to do your research and find out more about the topic. Nowadays, you Google it.

At first glance, looking for information in a library and searching with Google appear to have the pull factor in common: you decide what you want and ask the knowledge provider to get it. But hold on a second. Google is amazingly fast when it comes back with results, we’ve all noticed that. The results also appear to be eerily relevant to me, if only by showing me businesses that are located close to where I happen to be, for example.

Of course this is no coincidence. Google filters out an enormous amount of stuff that is deemed irrelevant – by Google, that is. Admittedly, if I’m looking for a French restaurant, I’d like Google to show me the ones in Dublin, if that’s where I happen to be. If I go to google.com, I am automatically redirected to google.ie. That makes sense. It appears however, that there is an awful lot more filtering going on in the background — more than the average user may be aware of. So much so in fact, that when we pull information from Google, it is skimmed off the top of what has already been pushed in our direction. Let’s not forget about the contoversy surrounding Google in China. And I’m sure Jim Corr has something to say about this, too.

Google’s auto-complete functionality lists suggestions as soon as you start typing your query, tempting us to just click on one of those, rather than completing our own search terms. If we make a spelling mistake, Google helpfully suggests a correction and takes the liberty of showing you the results for the corrected version — not your supposedly mistaken phrase. In Decemer 2004, when someone searched for “I love Jews”, Google famously suggested “Did you mean: I love Jesus?”.

Maybe the Google experience could be referred to as nudge technology. Users can fight back, however, and our submission to Google’s nudge is the equivalent of not changing TV channels because the remote is somewhere under the couch. I have seen my kids exhibit this lazy behaviour by routinely selecting one of the first results Google comes up with, rather than actually looking through the results to see what might be of real interest.

Of course the content that’s presented to us on YouTube has also been filtered and customised based on our previous online behaviour — or even based on the content of our emails, if we’re using Gmail, as my friend Dave Slater pointed out the other day. So what I thought was changing from push to pull, turns out to be some sort of pre-pushed pull. As for the information we receive through subscription feeds and other push notifications, as well as banner ads — these have been chosen and pre-filtered either by ourselves or by our perceived tastes, and can be described as, well… pre-pulled push, I guess.

So which is it? What’s better? I’m confused.

I like to think that push represents exposure to new ideas and other cultures. It can open our minds.

Push also represents indoctrination and oppression. It forces information down our throats.

Pull may represent free will and the chance to make our own minds up.

Pull also means that we play it safe and only get what we like to see, read or hear. It can inadvertently narrow our minds.

You decide — I wouldn’t like to push it. Or should that be pull?