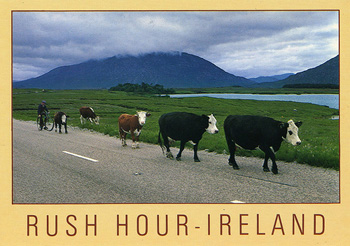 Upon my arrival in Dublin in 1986, one of the first things I bought was a bicycle. Being from Holland, I could not imagine how else you’re supposed to make your way around the city. Sadly, cyclists were and still are very much a minority group in this country.

Of course cycling in Dublin is quite a different experience than it is in Amsterdam, not least because of this minority issue. Cycle lanes were not introduced until the mid 90s and usually consist of nothing more than a strip on the side of the road where the tarmac is painted red. Irish cyclists wear those funny helmets that you would rarely see in Holland. And the bikes themselves are different too, of course — I quickly discovered that you really do need gears in a city that’s not conveniently flat like Amsterdam, where the highest points are the bridges across the canals and the bike of choice is a “High Nellie”.

However, the biggest difference between Ireland and Holland are the motorists. It did not take me long to discover that, as far as Irish motorists are concerned, cyclists simply do not exist. If a car is turning left or right, he will just cut across the path of any cyclists that may be around — this is especially true when turning left and the car cuts across bicycles travelling straight on on the same road. It appears that Irish motorists are blissfully unaware that the bicycle actually has the right of way in this case.

My bike was stolen sometime in ’88, and I bought my first car when I moved to Dun Laoghaire. Some of my friends fondly remember the light blue Renault 5, registration 103PIK — it served us well for a few years. This was in an era in Ireland when the closest thing resembling a motorway was a couple of stretches of dual carriageway on the N11 and the Naas road. “Ireland — where motoring is still a pleasure” and “Rush hour in Ireland” was printed on postcards with pictures involving Morris Minors and cattle or flocks of sheep.

A lot has changed since then. We now have more than 1,000 kilometers of motorway, and it is finally possible to drive from Dublin to Galway without getting stuck for half an hour on the Main Street in Moate. This journey used to take over four hours and now only takes around two. It has to be said though, that in those pre-motorway days there was never a problem finding a place to stop for a coffee, something to eat, a toilet break or petrol. That too has all changed — they somehow forgot to build a few service stations alongside the motorways. Or maybe it’s because some local politicians objected when the businesses of their constituents came under threat now that their towns were bypassed. In any case, it seems that service stations have now started to appear on some motorways so that we may eventually catch up with the rest of Europe, instead of having to look for Digan’s Garage in Tullaghnageeragh somewhere off the M6.

Driving on motorways and other dual carriageways is still a relatively new experience for Irish motorists, it seems. There appears to be no general consensus on which of the two available lanes constitutes the fast lane. Maybe the choice of lane is influenced more by the fact that the driver may wish to turn left or right at any time in the near or distant future, than by the speed they are travelling at. This lane dilemma has become even more interesting now that some stretches of motorway have three lanes, such as the M50 which circles Dublin. In this case, the preferred lane for motorists who like driving slower than the speed limit, is the middle lane. In both scenarios, the result is that overtaking on the incorrect side is commonplace on these types of roads.

The lack of driver education must surely lie at the root of this behaviour. How does one learn how to drive on a motorway if there’s none around? There’s an entire generation of Irish drivers on the road today who obtained their driving licenses long before the first motorway was built — or the first roundabout, judging by the current ad campaign on Irish television, attempting to teach viewers how to approach, indicate and exit these things. About time, since indicators are no indication — pardon the pun — as to the direction a car on an Irish roundabout might take.

That brings me to the most baffling of all motoring related things I have ever come across — the Provisional License. Now, I know that this idea was copied from the U.K., but that’s no excuse. How on earth can the people who run this country think that it’s a good idea to let someone do a simple theory test, hand over some money and let them drive off into the sunset? And do they really think that everyone bides by those rules of having a fully qualified driver sitting beside them and not driving on motorways? Thankfully there’s a good incentive for drivers to get their full licence, since without it the cost of their car insurance is astronomical. Before they pass their test however, they can happily drive around with their L-sticker as the only qualification. Even more bizarre, they can go to the test centre to do their driving test, fail — and drive off again. Not to mention the amnesty of the 1970s in which around 45,000 drivers got their license with no test whatsoever.

Irish roads are certainly safer now than they were 20 years ago, and the new drink-driving laws appear to be having a positive effect. If only they would get rid of the provisional license and make every motorist take proper driving lessons instead of circling around the local parking lot a few times – but hey, I’m sure people are glad I don’t make the rules.

One thought on “The Fast Lane”