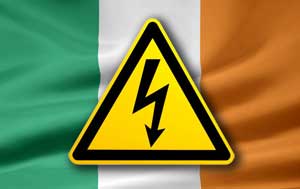 Having spent more than half of my life living in a foreign country, I have almost forgotten which of the differences between my native Holland and my adoptive Ireland struck me most when I first arrived on these shores. Of course we can’t really speak of “Culture Shock” when moving between two Western European countries (so much for the title). On the other hand, sometimes it’s the subtle distinctions between largely similar cultures that can cause more frustration and misunderstanding than one would expect. Most of the time however, we just feel that the other nationality displays some odd but harmless behaviour.

I’ll forget about the obvious oddities of driving on the wrong side of the road and speaking an inferior language — and I’m not telling which nationality’s hat I’m wearing when I say that. I’m also ignoring the fact that some of the anomalies I have come across over the years are not necessarily typically Irish – they may just as well apply to nationalities closely affiliated with the Irish (you know who you are).

In Ireland, you may see women walking down the road with their arms folded across their chest. I had never seen anyone walk like that in Holland. You swing your arms by your side, or you carry a bag, or whatever – but folding your arms is something you do when you’re standing still, not when you’re walking. Even stranger is that the behaviour is displayed only by women.

In Holland, many homes have toilets where the bowl is of a design that will freak out Irish people. Instead of being funnel shaped with a puddle of water at the bottom, they have a flat surface some distance below the rim with a drain to the front – so whatever is deposited here will stare back at you until you flush the toilet when the water pushes the lot off the surface and into the drain from back to front. As one of my Irish friends puts it, the Dutch “shit on a plate”.

In Ireland, another toilet experience may freak out Dutch men – but this time it concerns urinals in public toilets. The nice semi-private Dutch variety has little partitions between separate wall mounted bowls. The Irish style may involve just a wall. OK, it has a sprinkler tube running across the top and a shore at the bottom, but on a busy night you’re guaranteed an intimately shared experience when splashing your boots.

In Holland, if you have a mug of tea or coffee and stir it with a teaspoon, you leave the spoon in it, since taking it out will leave you with nowhere to put it without dripping some of the liquid onto the table. An Irishman will take the spoon out because you could stab yourself in the eye with it.

In Ireland, people go to someone’s birthday party and then hand that person a birthday card. “What’s the point?” asks the Dutchman, “Can’t you just wish them a happy birthday since you’re there?” – Dutch people will only send birthday cards if they can’t be there in person.

In Holland, you start a tab when you’re having a few drinks in the pub. At the end of the night you then split the bill between the members of the party. In Ireland, no self-respecting barman will trust you to actually pay the bill at the end of the night, and no self-respecting punter will trust himself to remember to pay it – so they work a rounds system. This gets interesting when there’s a mixed company of Dutch and Irish having a few drinks together. Regardless of who bought the first round, an Irishman is likely to say “I’ll get this”. A Dutchman’s reaction to this is invariably “OK” – but that’s like failing to haggle in an Arab market. The correct response to the Irish statement is “No, I’ll get this”. This should then be returned with “No, no, you got the last one”, followed by “No it’s OK I have it here” and so on, until the end result is that everyone pays at least one round. “Going Dutch” is obviously not an option here.

In Ireland, you have to strain to hear the music in a pub (if there is any to begin with) because there is so much talking going on. In a Dutch pub you have to shout to make yourself heard over the blaring music.

In Holland, many people don’t know the difference between the North and the South of Ireland and may assume it’s only a geographical denominator. In the days of the Troubles, the Dutch knew to avoid Ireland because of bombs (ignoring the fact that this applied mainly to the North), nowadays they know its economy is in shreds. In Ireland, people know about the Zuiderzee and the IJsselmeer, the dykes and the Randstad, the industry and agriculture and enough other things to put the Dutch knowledge of Ireland to shame.

In Ireland, they are very fond of salt in their diet. So much so, that I often see people grab the salt shaker and liberally apply the stuff to their dinner before they have even tasted it. Interestingly enough, Irish salt shakers have a single hole in the top, and the shaker with multiple holes is reserved for pepper. In Holland – you’ve guessed it – it’s the other way around.

In Holland and most of the rest of the world, Mother’s Day is celebrated on the second Sunday in May. In Ireland it’s on the fourth Sunday in Lent, and you’ll need a degree in astronomy to work out which date that will be in any given year. A mother however, will just know. You have been warned.

In Ireland, you may still experience an outburst of patriotic fervour at the end of a night out. As the bar closes, the band will play the national anthem and everybody will stand up and sing along. Many will have parents or grandparents with a living memory of gaining independence. It’s easy to forget that the Republic of Ireland is still only a young nation.

In Holland, whipped cream is sweet because they add lots of sugar by default. In Ireland, the idea of putting sugar in cream is revolting.

In Ireland, the first time I went to get a bag of chips, I was surprised by the now familiar question, “salt ‘n’ vinegar?”. Even after 20-odd years, I will not accept that chips could or should be served with something that belongs in a salad. In Holland, chips (patat, not to be confused with the Dutch chips, which are crisps, and in Ireland come in the horrid salt ‘n’ vinegar flavour also) are either served plain or “met” (with) — which is short for “met mayonnaise”. Proper order.

In Holland, when arranging to meet someone for the first time, this is likely to take place in the home. Only when you get to know someone better might you venture out and go for a drink. In Ireland, first (and subsequent) meetings are on neutral ground and involve going out somewhere, usually a pub — visiting someone at home is usually reserved for family.

In Ireland, people use clocks to find out what time it is, which is then rounded to the nearest half hour. “I wonder what time the train is due?” In Holland, people use clocks to find out what they or someone else are or should be doing and how long it is overdue or will take — rounded to the nearest minute. “The train is 3 minutes late”.

In Holland, when they invite someone to drop by sometime, they are surprised when that person never shows up. In Ireland, they are when he does.

In Ireland, when people become more familiar or at ease with the company they’re in (usually after about 20 minutes), they may engage in some good-natured teasing, making fun of a person’s background, beliefs, or anything associated with that person. The practise is known as “slagging” and the Dutch don’t really get it at all.